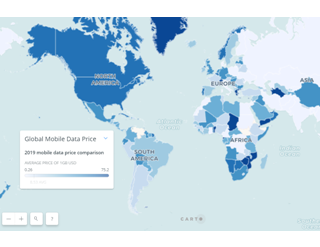 The Worldwide Cost of a Gigabyte of Mobile Data 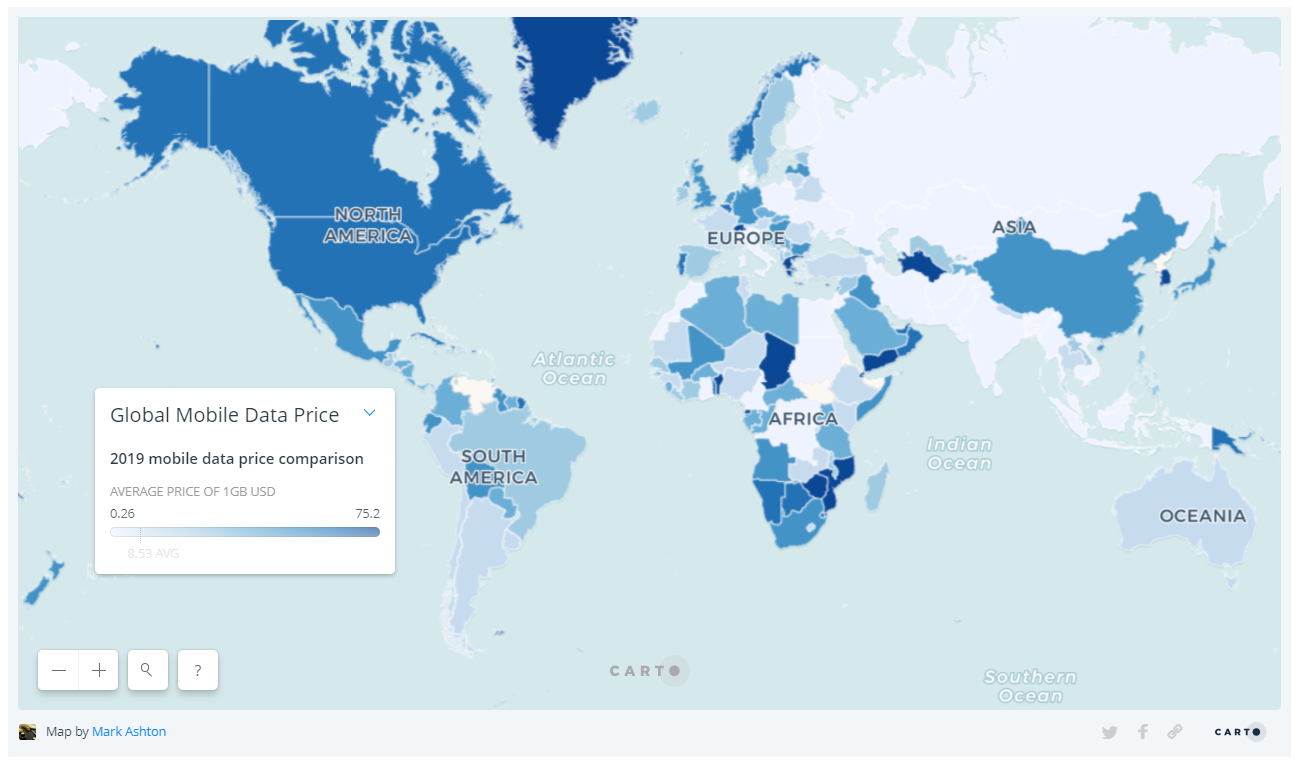 Some excellent analysis has just been released by Cable: Worldwide mobile data pricing: The cost of 1GB of mobile data in 230 countries.

Data from 6,313 mobile data plans in 230 countries was gathered and analysed by Cable.co.uk between 23 October and 28 November 2018. The average cost of one gigabyte (1GB) was then calculated and compared to form a worldwide mobile data pricing league table. This summarised information is displayed on a country-by-county basis in an interactive map, which can be seen by clicking this link.

There seem to be several explainable trends in the analysis, such as countries with mature and well-established infrastructure having a lower cost to serve per GB, wealthy populations paying higher prices or developing nations requiring more affordable pricing. The exception for me seems to be North America with mature markets and well developed infrastructure, yet it still ranks highly in terms of cost per GB. Canada ranks 179th and this issue is particularly acute in the US, which ranks 182nd. This is especially interesting when considering the on-going competition discussions in both markets, with the Sprint and T-Mobile merger in the US and the recent CRTC consultation regarding MVNO wholesale access in Canada.

I would also be interested to know what the actual customer cost is, based on usage, because this methodology seems to take into account just the top line retail rates but there is always some level of breakage involved so the cost to users is not always the advertised rate but more what they consume.

Some of the key highlights regarding what Cable see as the underlying drivers for cost are:

Excellent infrastructure: Countries with long-established, ubiquitous 4G infrastructure tend to fall towards the cheaper end of the table. This is due to the fact that mobile data plans have escalated far beyond the 1-5GB per month median, offering instead plans with caps in the hundreds of gigabytes, or even completely unlimited. The cost per gigabyte in these countries will tend therefore to be very low. India and Finland are good examples.

Heavy reliance: Countries with little to no fixed-line broadband availability therefore rely heavily on mobile data provision. In these cases, mobile data is the primary means the population has of getting online, and adoption is often near-ubiquitous. With a saturated market and many competing providers, often accompanied by a low average wage, data pricing in such countries can be exceptionally cheap when compared globally. Kyrgyzstan and Kazakhstan are good examples.

Small consumption: Countries where, although mobile data is widely available and widely used, the basic and/or overburdened infrastructure dictates a limited-use digital culture. In countries such as these, SIMs tend to be relatively cheap but predominantly available in very small amounts. In such countries, amounts of 2-5MBs, and with single-day expiries, are not uncommon. When multiplying such small quantities to calculate the cost of a gigabyte, such countries tended to find themselves at the expensive end of the table. Equatorial Guinea and Djibouti are examples of this archetype.

Wealthy economy: Wealthy nations tend to have good mobile infrastructure, decently-sized data caps and relatively healthy markets. Since these populations can afford to pay more, and network infrastructure costs tend to be much more to own and run, and provided they haven’t reached the ‘excellent infrastructure’ category where data limits are beyond normal usage or entirely unlimited, data pricing tends towards the global average. Good examples of this archetype would be the UK and Germany.