App Store Commissions, a Mexican Standoff and The Office.

App Store Commissions, a Mexican Standoff and The Office.

An App Store Mexican stand-off… is change in the wings?!

Apple is threatening to terminate Epic’s developer accounts, the maker of the hugely popular game, Fortnite, and it feels like we could be witnessing a pivotal moment in the App Store ecosystem story.

Apple banned Fortnite for violating App Store guidelines after Epic added a direct payments option into the game. In response, Epic, which has been officially backed by Microsoft in the dispute, filed an antitrust lawsuit against the tech giant citing competition concerns around Apple’s monopoly on the app ecosystem. The broader issue is that, in retaliation, Apple is now threatening to remove access to Epic’s Unreal engine platform of which there is an entire ecosystem of game developers currently using. The removal of Unreal would be a nuclear outcome for Epic and has the feeling of a company ending problem if Epic doesn’t relent. That, of course, Apple knows all too well. Apple is flexing its muscles, but they also realise that the stakes are high. By changing their commission structure and relenting to Epic, Apple could set a precedent of allowing app developers to dictate terms, which could be the start of a very slippery slope.

Apple has been notoriously ruthless in enforcing its 30% revenue share of any in-app purchases (15% for reoccurring subscriptions). Something we have witnessed first-hand at Mobilise. The ideological argument from Epic, and many others, including us, is that if Apple were to reduce its fee, this would spur more purchases, more app development, more usage and ultimately grow the ecosystem overall. The result would be that even though Apple is taking a smaller % share of each transaction, revenues would be greater for everyone, including Apple, because the pie is substantially bigger. 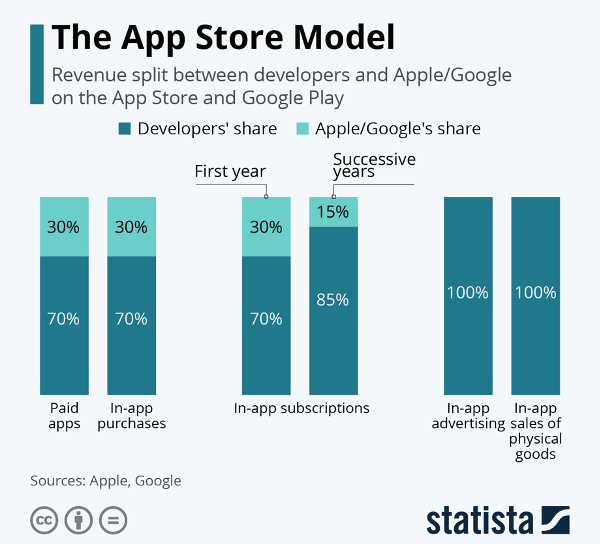 The challenge for Telecoms companies using the App Store is a straightforward one to illustrate. Gross Margins for mobile service providers can be anywhere between 40-60% and EBIT margins between 10-35%. Mature post-paid Mobile Operators being at the high end and lean, light reseller MVNOs being at the bottom end. We discuss more on operator margins in our post, ‘Telecommunications, is it a declining business model?‘. So, margins in telecoms, particularly MVNO prepaid where regular low-value purchases are frequent, do not allow for a 30% commission to be added in the middle. What this means is that selling via the App Store is just not viable for all but the majority of service providers, regardless of how much the user experience improves as a result.

This issue is in contrast to utility, games or lifestyle apps, which the Apple commissions structure was originally built around, where often the majority of the costs for these apps are upfront in the development process. But where in life running costs are much less and often limited to server hosting and operations and maintenance and incremental feature improvements. In many cases, the resulting gross margin for these app services, before commissions, can be 90% or higher.

There are alternative payment options that can be implemented, such as directing users to a website to add payment information to their account and then request them to come back to use the app. However, in a world where user experience is key to ensuring satisfied customers, this process is clunky, time-consuming and inefficient, leading to a far lower purchase conversion rate. We touch on the ever-growing importance of user experience in a recent post Telecom Business Benefits of Having the Right Digital CX in Place. A good user experience, particularly with younger users, can be the difference between success and failure. I would suggest the uplift in payment conversions Epic sees as a result of the ease of in-app payments is the primary reason why it’s digging in so hard against Apple.

In my opinion, Apple’s influence in the Apps ecosystem does have the feel of a monopoly, most certainly within the iOS ecosystem. There are smaller alternative iOS apps stores, but very few with meaningful penetration and usually require a user to forgo the security provided by the App Store, or to break Apple’s terms of use, to gain access. Given how fundamental the app ecosystem has become to modern society, it feels like regulators should have a greater part to play in ensuring competition is healthy in the App Store ecosystem in the future. Apple was hugely innovative with its ecosystem approach and have benefited handsomely. Still, there is an argument to say they are providing hosting and payment services comparable to traditional online payment processors where commissions can be between 2-5%. Apple has a great business process model that sits around its app ecosystem but are they really providing the added value to justify levying a 30% commission? Personally, I don’t think so, not anymore.

In telecommunications, network access has been regulated for decades with wholesale access to fixed-line being mandated, inter-operator network access being regulated through a continued reduction in termination rates and more recently roam like at home roaming price regulation. All of which have had positive impacts for end consumers spurring higher usage, more innovative business models and greater price competitiveness. When you compare the intense consumer-driven regulation the telecoms industry faces versus the App Store ecosystem, it feels out of balance.

Apple’s, and Google’s, influence is immense both commercially and politically, so it’s going to take a regulatory and legal system with balls of steel to upend their dominance. As an app development company and a consumer, it feels like change is well overdue.