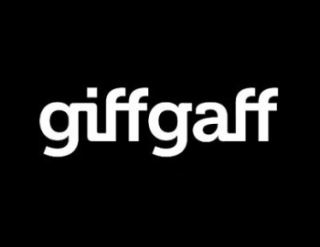 In this Results Round-Up, we are looking at giffgaff (GG) in the UK. The results we are reviewing are actually their full Year End accounts for 2018, which were published in September 2019 – even though a little dated, they tell a great story.

For those not as familiar with the giffgaff operating model, it was started as a community-focused mobile operator, where members (subscribers) are rewarded for promoting the business and answering support queries. Their slogan was ‘The Mobile Network Run by You’. By operating online and with minimal staff, giffgaff could offer its members incredibly good pricing and also still afford to pay them for participating in the community. This community concept was one of the key differentiators for the business, but GG also came to market with some innovative, and much sought after, flexibility around its pricing and contract mechanics.

Plans, or ‘goodybags’ were offered as 30 day contracts as opposed to lengthy 12 or 24 month contracts, which were common for postpaid services at the time, and gave subscribers the freedom to change between different goodybags from month to month, scaling up or down depending on usage. This was quite unique in the UK at the time and combined with the referral program, (£5 for every customer referred), these provided attractive incentives for new subscribers to give the service a try. There are stories of GG’ers earning huge sums from the referral program, including one customer who reported earning £160,000!

All this was way back in 2009, fast forward to 2019 and GG is celebrating its 10 year anniversary and a pretty stellar set of results for 2018. giffgaff reported revenues of £449m for 2018, which were up from £407m in 2017. Profit after tax was £30m, again up from £28m in 2017. It is a relatively low margin business in comparison to an established MNO (see link) but with such fantastic growth in a competitive UK market place, who could complain?! Interestingly their handset business has done £50m in revenue versus £48m in 2017, so roughly 10% of overall revenue. That is a good result but if you calculate how this translates into overall device sales, it’s modest versus overall sim sales. If we use our highly scientific, ‘back of a fag packet’ calculations, with the average retail unit price for a handset being around £500 (remembering they also do refurbished devices at significant discounts vs new), this gives total device sales of circa 96,000 devices (£48,000,000 / £500 = 96,000), so relatively small. giffgaff act as broker for these handset transactions, so it’s possible that actuals will depend on accounting treatment i.e. is GG recognising the full device price for all transactions or only certain transactions, for example if they are outright sales or with finance?

In terms of customer numbers, GG added 435k customers in 2018, which again is phenomenal growth in a competitive market and even more so when considering that two behemoths, i.e. Sky and BT, were flooding the market with advertising noise following their recent launches. ARPU is at £11.25 which is a slight decline from the previous year but probably about right in terms of the market considering their hybrid pre/postpaid offering and the target segment being younger and non-business. For reference, UK average ARPU, for Q2 2019, is £13.52 (which is derived from £17.24 from post-pay and £4.90 from pre-pay). GG don’t report the total subscriber base, but we can calculate this by summing their published annual net member additions up until the end of 2018. This results in a total of 3,076,232 members. Given that these figures were from the end of year 2018 and we are now almost at the end of 2019 and considering the recent customer acquisition trajectory, they are likely to be getting close to the 3.5m customers mark by now.

True to the lean business model they set out to achieve, GG has a fantastic revenue to employee ratio with only 141 staff generating almost £500m in revenue at a ratio of £3.8m per employee. This is swayed significantly by the fact that its parent company would be picking up much of the tab for what is a big portion of usual running costs, network and people. Even considering, this ratio is exceptional when comparing to the average revenue to employee ratio of, for example, a Fortune 500 company which can be around $300,000 per employee.

As is often the case, there is a steep j-curve with the MVNO business model and even with all the supply efficiency GG can leverage from its parent company O2 Telefonica, they have not been immune to a loss making period before reaching profitability. In the diagram below, we show how GG’s revenue and profits have evolved over time. 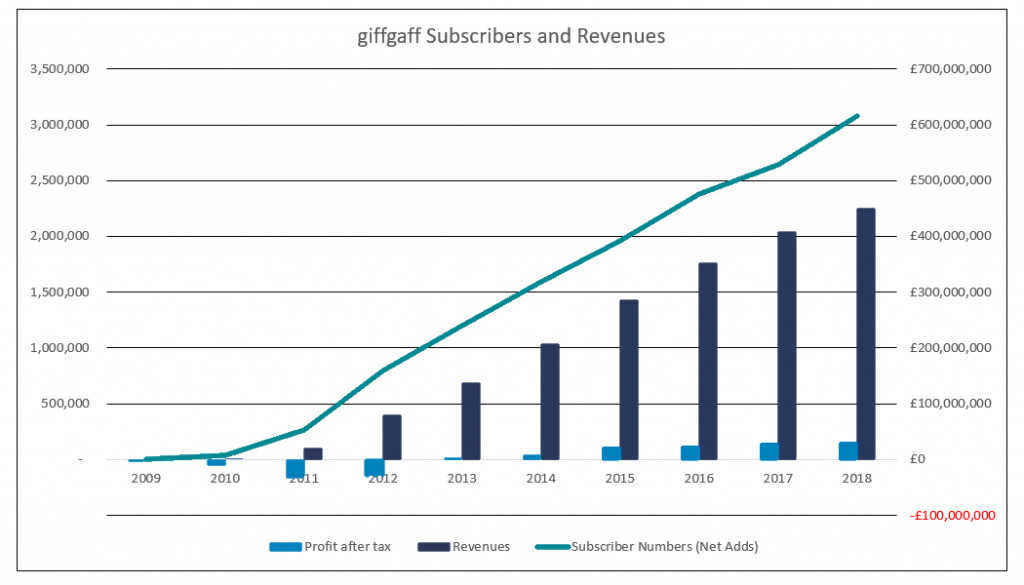 As can be seen, GG’s early years were deeply unprofitable and the business reported losses north of £70m over the first 4 years. Subscriber growth was consistently good over this period, so indications of success were positive, but never the less, the term “balls of steel” comes to mind when thinking of stakeholders / shareholders committing to ride out that j-curve! The real success and RoI has come in the more recent years of GG’s business lifecycle – imagine if the shareholders had decided to pull the plug after year 2 or 3, the U.K. wouldn’t have one of its most innovative telecoms companies providing the value it does to its members. Nor would we have the strength of competition GG has brought to the UK market, and globally, we wouldn’t have such a strong example of the how the community model can deliver value.

Long may the giffgaff success story continue, they are trying new things as well. The device finance program is interesting as is the money program, time will tell if they’ll be able to stretch into these verticals. In the meantime, long live the gaffers!